Look how old this is!
I post at SearchCommander.com now, and this post was published 11 years 11 months 10 days ago. This industry changes FAST, so blindly following the advice here *may not* be a good idea! If you're at all unsure, feel free to hit me up on Twitter and ask.

Google Instant was rolled out to the world yesterday, which changes the way search results appear.

Rather than waiting for you to push a button that says “search”, as you type, search results will simply appear, based on whatever you’re typing.

Although I HAVE seen it happen while I’m not logged into Google, I’ve also heard that it’s only supposed to affect those who are logged into their Google accounts. If you haven’t seen it, here’s a fast look –

There’s already been a very good summary written about the features and there’s lots of speculation over whether this is a good or bad thing for users and for SEO’s, but the bottom line here is that it DOES change the game quite  a bit, and it changes it in different ways for different people, depending on who they are.

Since this is my blog, here’s what I think about Google Instant Search… 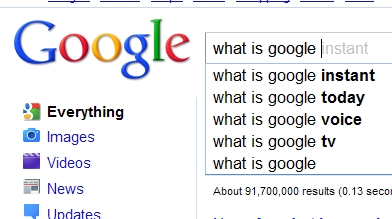 Some people will find Instant Search distracting while others may find that it provides a faster way to find what they want.

Peronally, I think in the long run, as people get used to it, it’s use is going to become second nature, and people will come to depend on it, but it will also broaden their thoufght process and will teach users to search more precisely, and with more specific search terms.

How Will of Google Instant Affect PPC Advertisers?
When I first saw this video several weeks ago, the very first thing that crossed my mind was, “What will this do to the impression counts in PPC campaigns?”

Decisions on pay per click advertising campaigns are based upon how often people click your ad, versus how many times it displays for a given search query. Knowing the accuracy of those numbers at least as accurate as they ever
have been) is a major concern, and fortunately Google has answered that clearly here – http://adwords.google.com/support/aw/bin/answer.py?hl=en&answer=187309

When someone searches using Google Instant, ad impressions are counted in these situations:

* The user begins to type a query on Google and clicks anywhere on the page (a search result, an ad, a spell correction, a related search).

This means that until someone has completed their typing, UNLESS they move off the search box and click your ad it won’t be counted as an impression.

* The user chooses a particular query by clicking the Search button, pressing Enter, or selecting one of the predicted queries.

In other words this is normal behavior, and nothing has changed. Pressing the button or selecting one of the suggestions count as an impression/

* The user stops typing, and the results are displayed for a minimum of three seconds.

This is self-explanatory but it’s really the only unknown piece of the pie. I’d like to believe that most people can beat the 3 seconds per letter deadline, but again, there are a lot of hunt and peck people out there. Is 3 seconds long enough?

Interestingly, the Google Webmaster Tools blog did mention today that after rollout of of Google Instant Search, your impression counts may appear to be skewed, so we’ll have to wait and see.

How will of Google Instant Affect SEOs and Organic Search?
For more interesting to me than PPC is how people find things organically, and I think this is going to be a plus for users, as well as for SEO’s.

Contrary to this article I think that this change in of Google Instant technology actually opens up the “long tail” of search even more, and will provide a greater opportunity for their content to be seen in the SERPs.

All over the web, people are giving their opinions over whether of Google Instant is a good or bad thing. Some even claim (ridiculously) it will be the death of SEO, and others in the media are parroting that sentiment!

As Matt Cutts said in his post about Google Instant Search yesterday,  “The best SEOs recognize, adapt, and even flourish when changes happen.”

Think about it – As people type, Google Instant makes the results and advertisements change before their eyes, more and content will have a chance to float to the top, for more and more laser targeted queries.

As someone searches for anything, the organic results will be changing multiple times, with a different #1 for each letter added to the search string.

Of course as people start to search more specifically, of Google Instant will show more and more specific suggestions, and people will arrow down to the “correct” choice too, so knowing these phrases, and utilizing them wisely into your content will make sense, of course.

What will be the Effect of Google Instant on Keyword Research?

Whether you’re doing research for organic or PPC, you’re simply going to have to step it up if you haven’t already. We need to know what those “suggest” phrases are, but Googles keyword tools do NOT give you that information.

Google does license out that API to others though, and the first tool I ever found for “Google suggest harvesting” was this one – http://www.promediacorp.com/suggester/ which is completely free.

Using suggestions from that tool, we were able to create lists, put phrases into Google Adwords, and after just a few hours of impression counts, we knew what was the most popular.

Yesterday, this post covered some other free tools that pull their data from Google Suggest, and I especially liked trying the two visualization tools recommended, What Do You Suggest and Seer for brainstorming ideas.

So What Keyword Tool Gathers the Best Suggestions?
Back in June, I ran across what I thought was going to be the Holy Grail of keyword tools, called Keyword Snatcher.

Not only would it compile a list based on every word with every letter combination from Google, but it ALSO used Yahoo and Amazon suggest too, gathering even more phrases.

It would also allow you to dig multiple levels deep, record the number (1-10) of where the phrase was on their suggestion list, and it even allowed for export.

The DOWN side of that tool though, was that there was no filtering, leaving you stuck with literally thousands of irrelevant phrases. The task of cleaning up the list into something useful was simply overwhelming.

So what’s the answer? For us, it’s been Keywords Magnet software, which seems to do it all, INCLUDING great filtering. There might be something come along that does the job better next month, but for now, nothings better that i’m aware of.

By the way, did you know that instant Search is not even Google’s idea? Yeah, me either…