Look how old this is!
I post at SearchCommander.com now, and this post was published 10 years 3 months 18 days ago. This industry changes FAST, so blindly following the advice here *may not* be a good idea! If you're at all unsure, feel free to hit me up on Twitter and ask.

Last night I did a search on Google because my wife had her car window smashed by some Portlandia hooligans  while she was watching the Central Catholic High School play.

The first result for “emergency auto glass repair” was Glass Doctor, and it was a combined local listing, so I picked up the phone and called them.

It was 5:01 PM  Sunday, which is when emergencies happen, so I wasn’t surprised when I got a human to answer the phone. What did surprise me though, was her telling me “I’m sorry we’re closed for the day.”.

I told her that was okay, and that I just wanted to schedule a fixed broken door glass on my wife’s car first thing Monday morning. That didn’t matter she said, and that she could do was have someone call me in the morning when they opened again. #FAIL (and I should probably nofollow their link) 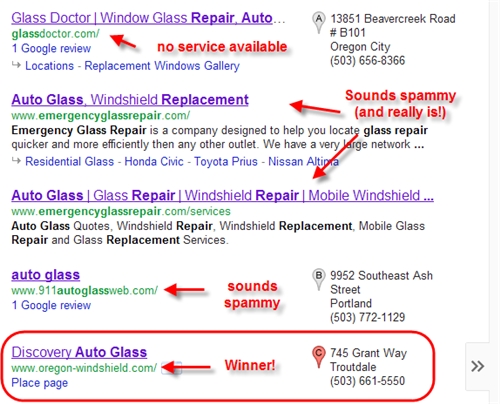 The 2 and 3 results were organic, but the domain name sounded spammy, and when I looked at the indented listing  page, that confirmed it.  What junk! Besides, I wanted a phone call anyway…

The #4 listing was local, but also had no real “business name, and the way it was non capitalized looked bad, plus it had a spammy sounding domain name,  so I called #5, Discovery Auto Glass. (note – I have norelationship with them or any domain in this space)

Discovery Auto Glass was the Winner

They answered the phone as if they were expecting an emergency, took my car model information and got my phone and address and said they would be here by 8:30 AM Monday morning. They called by 8:30 they were here by 9, and even as I write this the guy is outside now fixing it.

Why show me a closed business that can’t help me, Google? Is this a good user experience?

That’s Not Why I’m Writing This

Now I could say that by now, in 2012, in a personalized world these guys at Glass Doctor shouldn’t rank for “emergency auto glass repair” if they can’t help me at the time of day I’m searching,  but that’s not why I’m writing.  (Still, Google, them putting in their HOURS and me searching for “emergency” just might be a clue of when they’er a good result to show, I’m just sayin’.)

I’m writing because I although I DID find a real business that could help me, they supposedly shouldn’t have even been there, and looking at their business card just now is what inspired me to post.  Their business card has no address.

When I saw there was no address, I went outside and asked the guy if Discovery Auto Glass has a nice storefront where I can go visit them?  Maybe I could get some popcorn or coffee? As it turns out, no they don’t. They just do mobile dispatch. In fact, the guy asked “Why would I want that expense?” and I agree with him, and that’s the reason I’m writing this.

Google Doesn’t Want Them There

Why does it happen? Because according to Google, (and to David Mihm) I don’t belong there.

Google Doesn’t Want Me There

As David put it ever so delicately to me at last months SEMpdx meeting while talking to some Google reps…  I’m a spammer.  I’m nothing but a “ghost business” that doesnt really exist.

Sure I have clients, employees, customers, students etc., and I even pay my taxes, but because I work from a private / home office (and so do my employees and subcontractors), and because I don’t have a physical location to welcome and greet customers, Google says that I don’t belong in Google Places, and shouldn’t even HAVE a local listing. What a crock, huh?

Google doesnt actually wan’t anyone to be listed who  doesn’t have a brick and mortar business, and apparently, that applies even if it’s the best option for the person searching.

Dan Austin, a Google Maps “spam fighter” says as much in this interview where he equates having no storefront to a characteristic shared by a “shady business” –

Basically, a lot of what we consider ‘shady’ industries, where the profit margins are low, the line between black and white is exceedingly grey, limited regulation, no storefront, and…

Andrew Shotland wrote the other day about his own business disappearing and quotes Google’s “policy” on the subject, putting this in his comments –

The Google Places Guidelines specify that “Only businesses that make in-person contact with customers qualify for a Google Places listing.” so I should have just said I did, which I do, just not at my home office, but when she asked if I serviced customers at this location I said “no”

I think this post is a pretty good example of why I think this “policy” is inherently stupid and unreasonable, and I hope Google reconsiders.

These are the “local search results” we’re talking about, and the fact that they chose to call it “Places” (at least for the time-being) really shouldn’t be taken so literally.

What do you think?

Should Google exclude legitimate service businesses who don’t have a public storefront from the local results?  Why or why not?