Look how old this is!
I post at SearchCommander.com now, and this post was published 8 years 6 months 1 day ago. This industry changes FAST, so blindly following the advice here *may not* be a good idea! If you're at all unsure, feel free to hit me up on Twitter and ask.

Google is an unreasonable bully that has to be stopped, so I am officially announcing my intention to be the named plaintiff in a class-action Federal antirust lawsuit, naming Google as the defendant, and I’m looking for other SEOs and internet marketers to join in.

We will be filing the papers at 10a.m. PST tomorrow morning, April 1st, 2014, at the Mark O. Hatfield United States Federal Courthouse here in Portland,  if you want to come watch.

What’s the basis for this lawsuit?

Well, we maintain that after Google notifies a user of an organic search ranking penalty, they are conspiring to intentionally provide site owners with false, incomplete, and misleading data through their “tools”, thereby prolonging the time it takes to get a reinclusion request approved.

In turn, that unfairly induces site owners to spend money on Google AdWords, their only viable option to get traffic,  just so they can remain in business.  Let me explain this in layman’s terms, and give you a little background in what’s happening.

In the old days, your site either ranked or it didn’t, and aside from theorizing, you really didn’t know why. An industry was born, the world began to learn the basics of SEO – Search Engine Optimization”.

In early 2002, Google released something called Google Webmaster tools and by early 2003, Google had established the constantly evolving “rules of the game” that they call the Webmaster Guidelines.

This was fantastic.  This gave us in the industry some actual tools to help us do our job, and the progress in the tools has been amazing.

Today we can do everything from feed Google sitemaps of our sites, verify domain ownership, grant access to others, monitoring hacking, and get SEO suggestions.

There is even a tool that examines technical site performance related to our speed and compatibility with computers and mobile devices around the world.

Sounds great, right? It actually is Webmaster tools is an amazing thing, and without it, domain owners could not be in charge of their own destiny. The world continues to thank Google for Webmaster Tools, and I’m among its most avid supporters.

Now as a layperson, you need to know that besides the content and code on your website, search engine optimization also has to do with some external factors, and the most important over the years has been links.

Having others linking to your website was a far stronger factor than anything you might have on your webpage,  and people began to realize this. When they linked, how they linked, where they linked, and even what words they linked with,  all are considered in a way that would boggle your mind.

Let’s just say that the evolution of “backlinks” and how they effect your Google rankings has changed a lot over the past 15 years and I’ll try not to get too technical.

In the early 2000’s more and more people were writing about “SEO”, and even SEO conferences began, where people learned more and more, sort of “figuring out the system” of how backlinks could move rankings, and cottage businesses boomed that were selling links.

Google began publicly denouncing these paid & manipulative links, and in 2006 began notifying Webmasters of penalties, all the while people continued to manipulate and exploit rankings.

Things got so bad that in 2006,  Matt Cutts of Google publicly denounced upcoming speaker Patrick Gavin of Text Link Ads at Pubcon.  Things really came to a head in 2007 when Google even penalized MSN, and Matt Cutts announced how to report paid links. Finally, in  2009 Google even developed a special form to report for your competitors who were cheating.

Some Links Can Hurt You

Paid links could hurt you, and the most publicized example of this took place in early 2011,  known to this day as the JCPenney link scandal  (broken by the New York Times ), and that’s when I think Google REALLY decided to change the rules permanently, by allowing not just PAID links to hurt you, but ANY links it deems inappropriate.

Over the next couple of years, with all of the whining about “backlink manipulation” culminating in the public shaming of Google by Wil Reynolds of SEER Interactive in his SearchFest 2012 keynote coming to a head, on April 24th 2012, where Google officially changed the rules with something they called “Penguin”.

The exact same links to your website that used to help you rank higher, not only “don’t count” any more, but suddenly they can hurt you algorithmically too, in Google.

This change to the fundamental way that Google worked not only punished the evil doers, but was widely applauded, and seen as long overdue by many in the industry.  It really was about time Google cleaned up the mess they had created.

Even better, to help the site owner “get out of the doghouse” Google provides us with the tools and resources we need right inside of Webmaster tools so we don’t have to suffer this loss of revenue forever, and they can help us help ourselves.

This is All Just Wonderful

Google is cleaning up their act, and they’re helping us clean up ours, so how can this be a bad thing?  What possible basis can there be for a lawsuit?

To be clear, Google has a right to penalize anyone for anything they want, since the search index is theirs to do with as they wish. However, I maintain they do not have the right to cause financial harm to a business by discriminating against them in the search results without providing the correct information for the removal of that penalty.

I also maintain that by providing us with this misinformation they are intentionally stringing us along, and are thereby inducing us to increase  or begin buying Google visitors through the use of their advertising platform called Google Adwords.

I’ll get to that, but first you need a little more background:

When Google determines through various methods that a webmaster has engaged in what they consider to be “bad practices”, they send an e-mail to the webmaster
and webmaster tools saying that the site has been penalized. A sample letter looks something like this:

We’ve detected that some of the links pointing to your site are using techniques outside Google’s Webmaster Guidelines.
We don’t want to put any trust in links that are artificial or unnatural. We recommend removing any unnatural links to your site. However, we do realize that
some links are outside of your control.

As a result, for this specific incident we are taking very targeted action on the unnatural links instead of your site as a whole. If you are able to remove
any of the links, please submit a reconsideration request, including the actions that you took.
If you have any questions, please visit our Webmaster Help Forum.

At that point, the webmaster has to begin the process of requesting reinclusion, and Matt Cutts outlines the process here in this video:

This is the basic “full process” for getting back in Google’s good graces:

At that point Google will re-examine your situation, and will either accept or deny your reinclusion request. When they deny your request, they will provide examples of remaining links in your backlink profile that you have failed to identify in either your attempts at removal, or in your disavow file that you’ve  uploaded to webmaster tools.

Quite often the example links that Google dredges to show you are more than five years old and in some cases, like this one below, the “bad link” might even come from another property that Google owns! 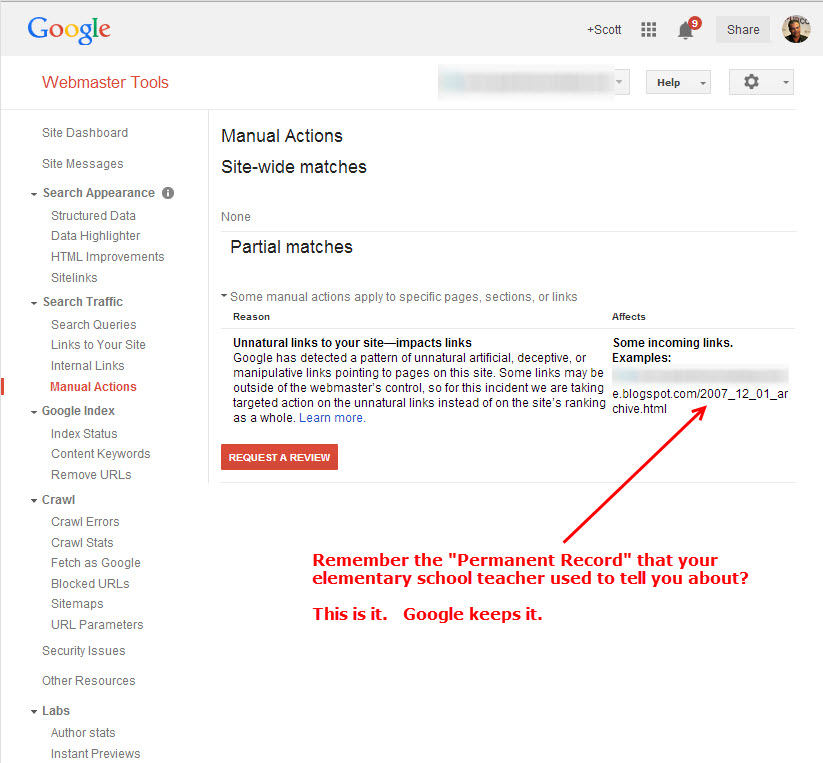 That’s Where Things Have Gone Wrong

Google gives us the information to undertake the process by providing details webmaster tools that show who is linking to you, and they identify the linking URL and anchor text of the
link.

Webmasters have a lot of work to do contacting site owners, combing through links manually, and determining with their best efforts
which ones are acceptable and which ones could potentially be harmful.

I believe that Google is intentionally feeding us false information in order to profit financially.

Unfortunately, despite the best efforts of internet marketing professionals, users are repeatedly being denied reinclusion, and then they are provided by Google with examples of
“bad links” that are *not* shown to the site owner in Google Webmaster tools.

For example, here is a user  that says  –

Here’s another user, an experienced professional in the art of reinclusion, that says this after being denied, referring to one of the “example links” that Google provided:

That link is not listed in the list of links that I have downloaded by going to Links to your site–>More–>Download latest links.  Just to be sure, I downloaded them again and it is not there.  I also downloaded “More sample links” and it is not in there

I could go on and on with more examples, but I think you get the idea.  How can you be expected to get out of organic penalty when Google keeps “moving the bar” and coming back with more examples of “bad links”  that they are not showing you?

Google and it’ employees have repeatedly said things that have turned out to be untrue. For example, John Mueller, in a Webmaster Tools Video Hangout said this:

…you can find all the links you need for webspam or algorithmic reasons in webmaster tools. So it’s not the case that you would need a third party or an external tool to kind of dig up all of those links to find the ones that are problematic…

Barry Schwartz at  Search Engine Roundtable was one of the first to report that Google says they are giving us all we need pointed out the hypocracy here saying this:

Marie Haynes posted topic in the Google Webmaster Help forums where she said a client of hers received an unnatural link notification from Google but the example inorganic link cited by Google was no where to be found in Google Webmaster Tools link report. 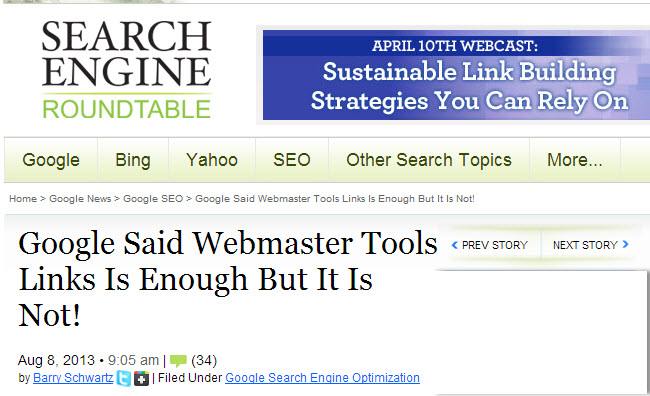 Who Actually Benefits From the Lie?

Why, GOOGLE DOES of course! When faced with a drop in traffic and repeated denials for reconsideration, site owners only have one option if they want to get back their traffic, and that is spending money on Google Adwords.

With Google dragging out the process of reinclusion over a period of months,  and by repeatedly citing more and more “examples” of bad links which they should have shown us in the first place, we are being indirectly pressured to spend money in Google Adwords if we don’t want to go out of business!

Who Can Join The Lawsuit?

My attorney,  who only weeks ago began working at the Peterson Law Offices, believes that there may be hundreds of thousands of potential claimants out there. He may just want to make a name for himself, but he’s taking it totally on contingency.

His parents were forced to close their online business after their ecommerce site went from  7.1 million dollars in annual revenue to less than $18,000 in their last full month of operation, so he has a personal interest.

Lastly, I’m also already reaching out to others in the industry asking them to spread the word. The general consensus is, that this thing could be winnable.