Look how old this is!
I post at SearchCommander.com now, and this post was published 10 years 28 days ago. This industry changes FAST, so blindly following the advice here *may not* be a good idea! If you're at all unsure, feel free to hit me up on Twitter and ask.

This Wednesday, May 30th in the ever changing world of local search, Google officially announced the “end” of “Google Places” and they are merging it with Google Plus (Google+).

This has been written up quite extensively already, but I thought I’d chime in on where I think “Google Plusaces” is going next…

As you can see, from this sample search below for a Portland plumber, the review stars are gone, replaced by a line with the number of reviews that business has.

However, if you have 10 reviews (apparently that’s the magic number now?), then the review count is automagically calculated under a zero to 30 point system which coincides with the  Zagat scale for restaurants.

Now  the posted information about Googles review scoring says that a review by a user is worth three points, then they multiply by 10 to get an indifidual score. 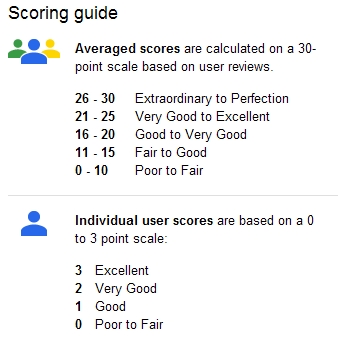 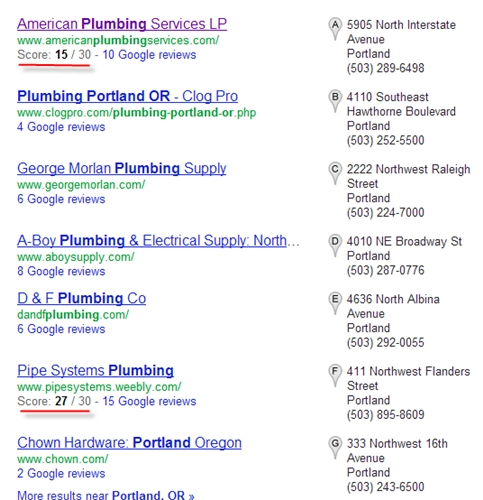 So What Do You Do?

As a business owner, it’s never been more important to play their game, and if you’ve not started, get in gear fast. But if you’re already claimed on Google local, there’s not much you need to do differently – at least not yet.  As explained by Google,

As a business owner, you can still use Google Places to manage your business. As a user, you can now rate, review and upload photos through our new local search experience, Google+ Local.

Wait, what? I thought Google Places was dead?  Oh, so google Places IS still where I manage my local business?  But now I have TWO listings… This is  my old PDXTC Google Places page that until Wednesday, was all that existed. 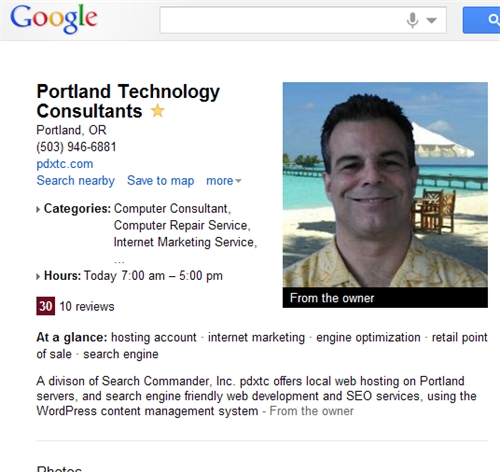 However, as of Wednesday, this brand new Google Plus page  is what users find in search, and it looks different. 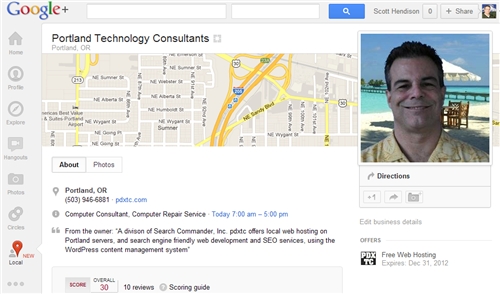 Well I’ve never liked the fact that Google randomly chooses one of the photos to show, and this morning I had the bright idea to try making a REAL Google Plus page of my own, and then I could hopefully use my logo instead of my FACE as the business image.

I was thinking that by using the same phone number then they might somehow make the connection and allow me to edit in the Plus interface, but all it did was create what amounts to a duplicate listing so now I have THREE Google business pages. Ugh.

Okay, so the stars are gone, but the reviews are still there, right?  Oh wait…what?  The names are gone of all the reviewers?  Yep. As Google explains it, they’re now anonymous.

If you previously wrote reviews or uploaded photos in Google Places, all of your old Google Places reviews and photos are currently public but attributed to, “A Google user.”

That’s right –  they no longer have names and faces associated with them, and you can’t even click on the “user” to easily spot the rampant fake reviews.  How ridiculous.

The end user, (those who have left reviews), CAN associate their previous reviews with their name and photo, but there’s nothing YOU the business owner can do about it, and your legitimate reviews just became “questionable” in the eyes of many.

As Google explains it:

What’s next for Google Plusaces?

Nothing is ever “permanent” and I expect to see a further merging of the organic and the local serps, sort of like when we first got “blended” local search afterthe 7 pack went away, where the entire page was merged with organic and local combined listings.

Asking myself what the SERPs are going to look like next, it was  worth noting that the review stars DO still show in the organic results when they come from adding your own schema data and microdata.

What I expect to see before too long would be the addition of a company logo, like the rel=”author” tag works now, but they’ll pull it from the Google Plus Page.

I also wouldn’t be surprised if it turns out to be a paid enhancement only available to advertisers, completing the “sell out” process like Yahoo did a bit of five years ago.   If I had to guess, I’d say that’s what the idea was behind the Local Paid Inclusion  kerfluffle that hasn’t yet quite come to fruition.

So, if Google pulls your microdata (or hcard, schema,org ) data and also took the image via rel=”publisher” from your Google Plus page,  AND integrated the recommendations of your “friends” when you’re signed in, the results  might end up looking something like this:

Disagree? Then what do YOU think is going to be the next big change?