Google is All Over the Map

Look how old this is!
I post at SearchCommander.com now, and this post was published 11 years 8 months 17 days ago. This industry changes FAST, so blindly following the advice here *may not* be a good idea! If you're at all unsure, feel free to hit me up on Twitter and ask.

Google is all over the map in the way it displays search results,  but it looks like  SEO, web-hosting, and web design are not!

Well, technically they’re still  “on the map”  but the map is not showing up any more in Google searches.

Yes, in case you missed the news,  Google local map results are not being shown any more for web designers, for search marketing firms,  or web hosting.

Why?
It’s still unclear, and to my knowledge, there’s been no definitive explanation from Google.

As a local webhost / search marketer / developer, I’d like to point out that this sort of… well…  sucks to be singled out, and to me it makes no sense.

A Little History for Beginners
Google introduced local map results into the mix quite a while ago, and they’ve changed when and how they display several times.

After PPC ads came along, searching for a local business showed like this – 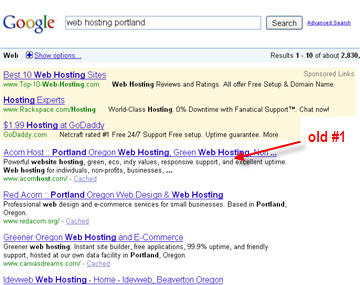 About two years ago, they started showing a map, and either one or three results, when someone did a search that included a geographic target. 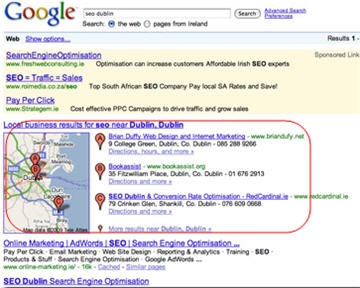 Then in January of 2008, they dramatically tripled the front page real estate to show TEN results,  although late last year they knocked that number back to just seven. 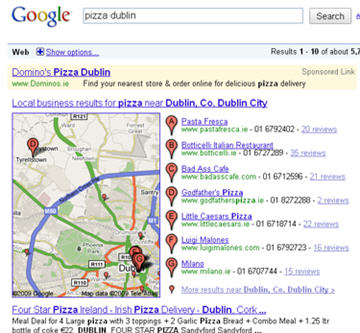 Obviously this had the effect of pushing the organic search results even further down the page, below the PPC ads and below the map results, effectively making the number one organic spot appear in what is really the 14th position.

The entire web marketing industry changed for local businesses, and a new niche was born, with a different set of ranking factors almost completely unrelated to typical SEO.

What’s Happening Now?
Nearly two months ago, November 2009, they began to make some more changes, and then suddenly were not showing ANY map results for “web design” when a city name was included.

This was followed quickly by Web hosting, and they have now removed the map results from all SEO, and Internet marketing services type phrases too! Huh.

On December 14th Brian, a Google employee noted on another thread –

…it looks like a lot of the recent search examples on this thread have to do with web design, SEO, and other services of that sort.

It’s possible that instead of being related to the original issue, Google.com doesn’t bring up map results for these types of searches because the search term doesn’t show much local intent.

On December 31, a Google employee caused quite a stir when he said this:

We believe this is an accurate representation of user intent. In some cases, we do show local listings, however (as NSNA/php-er noted) [web design in bellingham].

I’m sure some of you feel we should be displaying local results for queries like [Web Design Vancouver]. I understand that concern, but based on our understanding of our users, we feel this is the right decision for now.

But using “In” Counts?
Before Joel from Google replied, someone pointed out that using the word “in” does trigger the maps, but Joel didn’t address that at all.

Yes, it seems that by using the word “in”  – a word that has pretty much been accepted as an SEO stop word – users will trigger these drastic result changes.

Will it’s use just affect Google maps, or will having “in” in your title tags now factor higher in organic listings?

Perhaps that too,  will be industry specific? sure would be nice to get a list of those industries? Unreal.

Is this Fair?
They don’t need to be “fair”, or even reasonable!  Google can do whatever they want, and in this case, it sounds like they want just tell us “thanks and goodbye“.

If someone searches for “plumber Portland” or any one of hundreds of other products or services, they’re going to see local map results, but for Portland web hosting, they’re not. That’s just the way it is.

The fact that this could happen to any industry tomorrow is what’s the most frustrating, and does seem a bit unfair – not so much to us, the “evil industry”, but to the public, who rely on our interpretation and expertise?  What are we, as industry professionals supposed to tell clients?

Over the past year, we’ve been seeing local businesses pretty much ignore the organics, in favor of local efforts, but maybe they should just put  “in”  before every city name in their title tags? 😉

I Think Google is Being Arrogant
In 2007,  I was at the Search Engine Strategies Local conference in Los Angeles, and during a Q&A, I asked John Hanke, the Director at Google Maps:  “Besides having an address near the center of the zip code, what factors determine ranking in local search?

Rather than give me anything useful, he appeared almost shocked that I would ask such a thing, and he actually said he “wasn’t there to give away  Google algorithm secrets”! (Not even at SES?)

I was stunned, and some members of the audience (who seemed to be mostly advertising executives and PPC managers) laughed at my stupid question.

Today, there is a wealth of local search information and search knowledge like you can’t believe. The entire industry is making Google gazilionaires,  and they want to treat us like this?

Frankly, I think that Google is simply spitting in the face of the very industry that helped build them up in the first place.

The Teaching Moment
the word, “it”  – a word that most SEO’s have long treated as just an SEO stop word, is now going to trigger these DRASTIC changes.

However, This fact only applies to some industries, and that list is subject to change, although there IS no list you can see.

Just like the weather here in Oregon, if you don’t like the way Google search works today,  just wait a while because you can bet it’s going to change again, and probably soon.

Note – In complete irony, this Monday’s snail mail contained a window decal and a letter from Google maps stating that I was a “favorite place” –  which is now pretty much pointless! 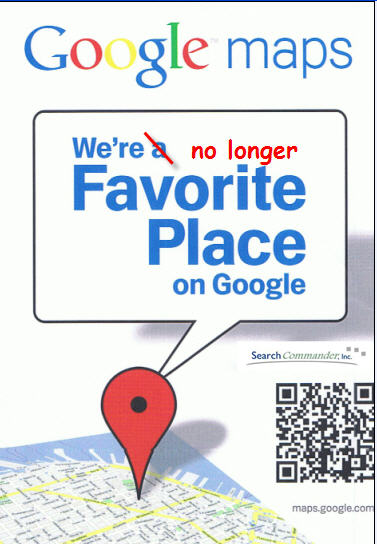