How I Control My Windows Performance

Look how old this is!
I post at SearchCommander.com now, and this post was published 14 years 21 days ago. This industry changes FAST, so blindly following the advice here *may not* be a good idea! If you're at all unsure, feel free to hit me up on Twitter and ask.

There is nothing worse than computer problems, and there’s nothing better than free software to prevent them in the first place.

One of my favorite utilities of all time, Winpatrol,  has just updated to their 2008 version, and the company owner has provided me with an affiliate version that I can give away at no charge.

I used to have a computer repair store in Portland, and our shop fixed anywhere from 30 to 60 computers a week that people brought in from various problems. Additionally, we did a lot of on-site service too, dealing with small businesses, setting up networks, file sharing etc.

While some of the computer work that got done was upgrading or replacing components, the vast majority of our work had to do with “problems”, meaning Windows just wasn’t behaving the way it was supposed to.

Nine out of ten times the problem was not with Windows, but with third-party software that had been unknowingly starting up on the user’s system, sucking up all their available memory.

Whether that software was spyware, or a legitimate piece of software that simply attached itself to the Windows startup process, making the computer run more efficiently always involved removing these startup programs from memory.

As far back as 1998 I was writing articles not only about the search engines, but about how to improve performance on your computer, and even how to be your own IT department. A few years ago a local consultant named Steve Shank told me about a program called Winpatrol, and as soon as I tried it I was hooked.

Everything about Winpatrol is designed to give the user complete control over what runs and what doesn’t run on your system, so you can maximize your performance.

There’s an easy user interface that lets you see what’s starting up each time Windows does, and you can remove or disable them as you see fit. In some cases, the change can be so dramatic, that it will feel like you’ve got a new computer at your desk.

After my recent hard drive loss I had to reinstall windows, and after completion, here’s everything that Winpatrol helped me disable with a simple click of the mouse. Do you think my performance improved? 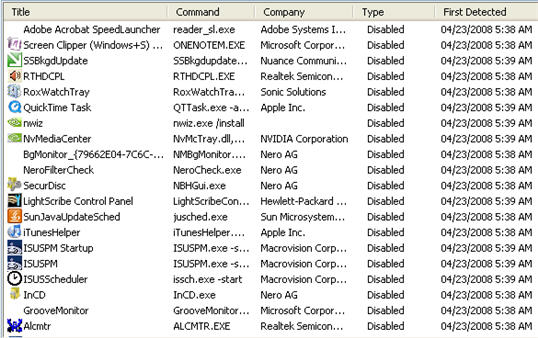 Choosing to “disable” something doesn’t remove any functionality from your system, it just prevents it from starting up when your system boots, so things can be started manually, if needed. If you’re not sure what something is, there’s an info screen that tells more about each individual item, like the company name and when it was added to your system.

The free version gives the same full functionality as the paid version, but the paid version has a few benefits, including access to a massive knowledgebase about nearly every program under the sun, and “real time” infiltration detection. True geeks like me will want that stuff, but for most people, the free version is everything they could want. (Personally, I still think he gives away far too much for free, but it’s gained him quite a huge fan base)

It’s very easy to figure out, with an intuitive user interface, and a quick and easy setup. However, if you are a complete beginner, here’s a link to a short video demonstrating how I downloaded, installed, and configured it on a system recently. The video is in Flash, and will open in another window.

When I was interviewed by a local television station a few years ago on the dangers of spyware and how users could control it, I recommend the Winpatrol program on the air, and it turned out that Bill Pytlovani (the company owner) had a daughter that lived here in Portland. After seeing the on the news, she phoned him, and he got in touch with me.

Ever since then we’ve stayed in touch on and off, and I remain a big fan to this day. Here’s a link to Bill’s blog, and here’s a direct download link to the free 2008 version of his software, which I am 100% certain will improve your computers performance. Try it, and please comment here and tell me what you think!