Look how old this is!
I post at SearchCommander.com now, and this post was published 13 years 7 months 27 days ago. This industry changes FAST, so blindly following the advice here *may not* be a good idea! If you're at all unsure, feel free to hit me up on Twitter and ask.

I found a code online that lets me add this feature to my Comcast remote.

What I liked most about my Dish DVR was the ability to press a button and skip forward 30 seconds in a recorded program. This feature allowed me to skip commercials, which was the main benefit to recording TV programs in the first place.

That’s why I was so surprised last week when we switched to Comcast that the feature was missing. Oh sure, I could speed up the commercials by 4x or so, then have to reverse again when I passed the return of the show, but there was no measured way to skip commercials.

Very disappointed, I casually mentioned it to Comcast on the phone during a call about another issue. After confirming with him that there was no “pre-programmed” feature on the remote to do that, I told him that I really hated it, and was considering switching back.

That’s when he told me that some industrious people had posted a hack for the remote online, and with “a little effort” if I “knew how to use a search engine well” I could possibly find it out.

Well, it actually took me nearly 15 minutes, but I found it, and here it is, for your TV commercial skipping pleasure (with a silver remote and a Motorola DCT3412 box)… 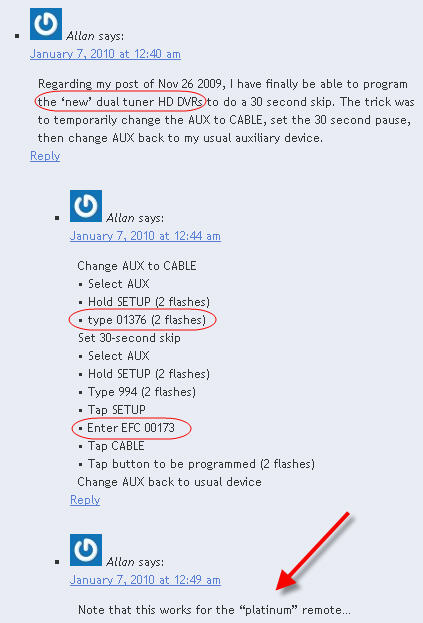 Ha! Take that, you…you… well, whoever you are that kept us from this feature in the first place…and thank you, to the AVS forum.

The Comcast guy on the phone claimed that they were “pressured” by Motorola to leave that off, but i have a hard time understanding why. It’s obvious why the networks and TV stations don’t like this feature, but why Motorola? Are they owned by (or own) a major media company?

Anyway, I’m happy again, and can now watch 2 hours of TV in an hour and 40 minutes, leaving me extra time to search the web for stuff I think I need…