Look how old this is!
I post at SearchCommander.com now, and this post was published 14 years 1 month 21 days ago. This industry changes FAST, so blindly following the advice here *may not* be a good idea! If you're at all unsure, feel free to hit me up on Twitter and ask.

Peak Studios is a “search marketing firm” in Colorado that deserves special recognition for being incredibly stupid. Apparently, they’ve decided to leave fake negative reviews on my local business profile in Google, and they’ve done the same thing to several other members of the SEMpdx board of directors.

The owner, Quince Wyss, has now moved from a simple ignorance about marketing tactics into complete and total idiocy, and I’m sharing the story here because he’s crossed the line with these personal attacks.

The Story:
Back in October, someone posted twice in a row at the SEMpdx forums with two poorly written self promotional articles that were not only poorly written, but also had embarrassingly bad formatting, grammar, and punctuation.

As a forum moderator, I was just going to delete them when I noticed something comical – The “service” being hawked in these two pieces of junk were for an SEO / SEM company in Colorado named Peak Studios.

The person that posted even left their name, company name, and their email address, website and phone number, on both of these ridiculous “contruibutions”.

First I laughed, and then I Twittered this – “If you were an SEO company, would you forumspam us at SEMpdx? Duh. So, I’m calling [unlinked here] Peakstudios.com and I’ll report back”.

I realized it might just be someone trying to make Peak Studios look bad, so I decided to phone the company and alert them to what had been done.

How Did Peak Studios React?
You can imagine my surprise when the owner, Quince Wyss, told me that they DID have an employee with that name, and Quince said he wanted to see what the employee had written.

I forwarded the “articles” to him by email, expecting to get a message back that he was embarrassed and sorry, and that the employee would undergo some training about what is and isn’t appropriate. Certainly he’d train him more about how they want to portray themselves in the public eye, right?

I hung up thinking I had done a good deed, but an hour later I got an email back from him actually defending this crap, and he also “demanded” that I retract what I had said on Twitter!

Well, never one to miss an opportunity, I wrote an article called “Forum Spam is in the Eye of the Beholder” and posted on the SEMpdx blog, calling out Peak Studios by name as defending the practice of spamming forums.

Todd Mintz submitted it to Sphinn, where agreement was nearly 100% that this guy was in the wrong. Well known and respected internet marketers like Jill Whalen, John Andrews, Daria Goetsch, Nick Wilsdon, Kim (Krause) Berg and many others all seemed to agree that yeah, it was totally inappropriate.

But after seeing the internet community lined up against him, did Quince Wyss see the error of his ways and do the right thing and apologize?

No – of course not. Peak Studios continued to argue the point as the only defender on the thread, Opiumden. The debate got so ridiculous that commenting was turned off by adnimistrators.

Was that the end of it?
Oh no, not by a long shot. This genius then actually phoned both Kent Lewis, the past president at SEMpdx, and Ben Lloyd, the current president, and “demanded” that my article be removed, threatening lawsuits, retaliation, and blah blah blah.

Quince claimed both that I had edited his “articles to make him look bad” (LOL – why would anyone do that?), and he said that there was “nothing wrong with what he’d done”.

At that point it became even more ridiculous, as several emails went around among the SEMpdx board before we all decided unanimously that the article should stay up.

I mean, here’s a “search marketing firm” engaging in the same exact kind of forum spam that you see for Viagra, but it was for their own industry, their own business, and they were actually DEFENDING it! We all found it incredible.

So, Ben basically told the guy to take a hike and to go ahead and call his lawyer, because we all agreed he was clearly off his tree.

Was that the end? Oh no, just wait, it gets better…
Earlier this week, someone supposedly named “Jesse Vandalino” posted a silly but negative comment about SEMpdx on a very old outdated blog post at Matt McGee’s Small Business Marketing blog.

Matt emailed Todd Mintz and asked him if the name “Jesse Vandalino” rang any bells, which it didn’t, and we all suspected that it might be this guy from Peak Studios trying to engage in some reputation damagement.

I heard about this all on Saturday, and a quick look at my own Google profile turned up the one and only negative review ever written about my company. Sure enough, it too could be tracked back to this bozo at Peak Studios. Here’s a copy, in case I can get it removed… 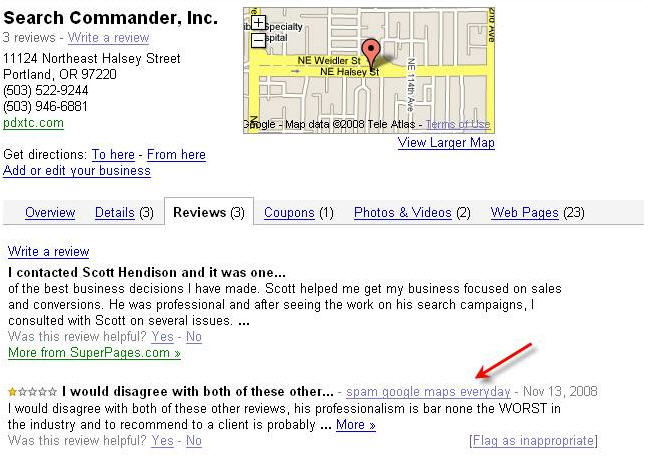 Why am I writing this now?
Because after seeing this fake review, I was so mad that I picked up the phone and called Peak, leaving a profane voicemail that he should have some balls and call me. What did he do? Did he “man up” and phone me? No.

After editing out his own name, his company name, and the dirty deeds I was accusing him of, he then posted the voicemail on youtube in another public smear attempt. (I guess it serves me right, but I was genuinely pissed!)

That wasn’t enough tough, and he began contacting others, like the East Portland Chamber of Commerce, and linking to the Youtube edited voicemail with more comment spam.

THEN he went back into my Google profile and added another fake review, this one with reference to the voicemail!

If this guy will spam our forum, then go to all the trouble to attack us personally when he’s so clearly wrong in the first place, what might he do for his clients?

I took a look at just the first client listed in their “web portfolio” and here’s a short video of how they “market”, including:

Here is my proof that they are leaving fake reviews!

What’s the most disturbing is NOT that he’s too stupid to realize that they spammed in the first place.

It’s not even that he’s so dumb that he used the same user accounts making this so easy to uncover.

No, what’s most disturbing is that there are businesses in Colorado that are falling prey to the supposed “internet marketing services” of Quince Wyss at Peak Studios, and they are risking their business reputation .

Don’t take my word for it; check them out for yourself! Here are a few fake user reviews I found for ChemDry carpet cleaning, a Peak Studios client – One, two, three, four

It’s one thing to engage in some negative smear campaign against me or SEMpdx – we’re big boys & girls and can take care of ourselves.

What they’re doing is posting fake reviews of their own clients, and they’re posting fake negative reviews about their clients competitors! That is SO far over the top that I I think they should be sued.

Only the most despicable company would engage in a negative campaign of actual lies about the competitors of their clients, right?

Do you think their clients have agreed to let them play that way?

Update – 14 months later, Peak Studios is at it again so i’m closing comments here – please go to the new thread…